In Respect of Saugers
by Colin D. Crawford

Many anglers today select a specific fish to pursue. Some anglers will only fish for bass, others only for musky and of few only for walleyes. Next time you find yourself on a river system in North America you might want to try a scrappy little fighter called the sauger. Saugers dont earn the respect they should, maybe it is because they "cousins" to the table fare walleye.

First of all, the walleye and the sauger are similar in shape. Both of these fish are "cigar shaped" and to the novice they are sometimes mistaken. They both like similar "haunts" and they are often times caught in the same general area. The saugers are usually found in the river systems and some anglers have reported catching saugers in lakes. But with a closer observation they discover that the lakes are part of a river system. Saugers are also referred to as "sand pike" and many times they are caught adjacent to sand. The walleye in comparison can be found in river systems lakes and close to sand flats.

With all these similarities in mind you should also realize that there are differences. The physical appearance of a sauger is noticeable. They have mottled colored sides that gives them the camouflaged pattern. They have the ability to blend into their environment, especially the bottom structural patterns. Their dorsal fin ( top fin) is even camouflaged, weith a system of polka dots. In comparison the walleye doesn't have any of these physical characteristics. Likewise the sauger doesn't have that distinctive white spot on their tail that the walleye has. ( See diagram )

The sauger is also found deeper than walleyes and it usually will not achieve the weigh or size that a walleye will. In fact, most state records on saugers tell the angler that a large six pound sauger will be close to their state record. These commandos like current. They live out their lives in current breaks behind rocks, man made rip rap, stumps, downed trees and below dams, bends of the river, and off the tip of sand bars. They wait and watch and when the food offering floats by they attack and retreat to the protection of the current break.

How does an angler pursue these commandos of the deep? You might want to drift fish for them, which is very common on river systems or you many want to anchor above these current breaks. Anchoring is a method that helps present your bait in a natural method and it is a method that will allow you to catch more fish than trolling or casting.

The majority of fish in a stream face into the flow of water and wait for food to come to them. They are able to watch the water column from the bottom to the surface. It is important to understand that fish in current seldom move very far for food. An angler must present the bait or lure accurately or it will be carried downstream without a response. Fish feeding in a current have only a second or two to decide whether or not to take an offering.

Scientific observation have shown that most stream fish feed constantly and take advantage of whatever food filters their way. Specialization occurs only when there is an abundance of one type of food such as the hatch of a particular insect.

One of my favorite times is when the fish are working small, shallow structures like rock humps. Let's say we have some sand flats that are about eight feet deep. Scattered on the sand are small rock humps. These humps will hold fish throughout the year, and we can take some fish by trolling over them.

Troll over these shallow locations a few times, though, and the fish will probably spook. Here's how I work these spots from an anchoring position.

I go over the sand flat with a close eye on my sonar unit. When a hump is spotted, and if there aren't a lot of other anglers working this area, a marker is thrown on or near the hump. I'll then go and look for and mark a couple of other close-by humps. This gives the fish on the first structure a chance to settle down and get ready to bite.

When I'm ready to start fishing the first spot, I'll anchor upwind or off to the side of the structure. Anchor directly off the bow to start with. Then change the direction, from portside to starboard and use your electric motor to swing your boat over the hump. This will allow you to virtually cover the entire hump. ( something you should do on sunny days or when there is a lot of boat traffic) When fishing crawlers and leeches in a river system sometimes the bite becomes a little slow, so drag or slip your jigs off the bottom ever so lightly. Occasionally, lift it slightly off the bottom. I have found this change will trigger some of the non-aggressive fish, however have plenty of jigs because you tend to snag more using this method. The sauger is a great replacement when you are looking for walleyes and they are scrappy fighters.

If you are interested in a guided trip, a personal media interview, or photo shoot, please call 715-545-8347. I am located in Phelps, Wisconsin area, close to several fishing lakes. See you on the water this season. Remember NPAA #94 and when the walleyes are biting why not try their cousin, that doesnt get any respect, the sauger. Hope to hear from you soon. 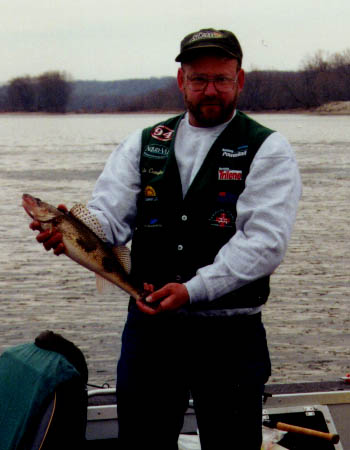 This Fishing Article is brought to you by Colin D. Crawford