Even though many of us would not consider ourselves of the gambling sort, there are many instances in each of our lives that we make decisions that involve risk. Some of these decisions lead to success, others leave us scratching our heads in puzzlement.

The same is true for anglers. We make on the water decisions all the time. Some help us catch more fish and/or experience a more enjoyable day of fishing. You see, it really doesn't matter whether you're a beginner, veteran or a pro tournament angler, we all face the same obstacles and stubborn fish.

The largest and most formidable obstacle we face is time. One of my favorite movies has a line that suggests that time is a predator, stalking us until finally it hunts us down and makes the kill. While I suppose our mortality confirms this suggestion in a physical sense, it is the time, or lack of it, we spend in pursuit of the walleye that I address here.

So Many Fish - So Little Time

It was just this past spring, during a hectic 12 - week run of show appearances that I developed a seminar called Time Management for Walleye. With only so many hours in a fishing day, how we spend that time is of critical importance.

Beyond versatility, there is a trait that every angler needs to acquire. I don't even know what it is called. It can be described as the ability to know when to stay and when to leave a particular spot or technique.

Versatility is a term that in my mind pertains to technique, while this unnamed trait deals with location. When do you leave a spot or area that has been so productive but now is only grudgingly giving up a few walleye if any at all? You can still be marking fish on your sonar screen, but upon several hours of various attempts to get bit you still have zip. We've all been there.

Not long after the frustration of these events set in, you start humming the tune to the old English Rock song "Should I stay or should I go now". The words describe exactly how you feel. " If I stay there could be trouble, if I leave there could be double." Stay and you could be risking that the fish just on the other side of the lake might be biting. Go and the fish you are currently working over might just decide to start feeding. What to do? Decisions & decisions!

If something is going to happen, it will usually happen quickly.

Once you have located walleye, spend some time working them over with various techniques. For open water areas, try trolling crankbaits or spinner rigs with crawlers for the suspended fish. For fish relating to structure, try casting crankbaits or jigs baited with plastic or meat. No takers on the first offering try something else, something different. It isn't surprising that sometimes all it takes is a change of color, speed or action to get the bite going.

After about an hour of thoroughly working these fish with little or no success, its time to move. Relax, if those fish you're leaving decide to chew, you will still be able to get in on it.

Before leaving, make note via GPS or landmarks as to the location of these fish. Why? Because you're going to come back to that area in a few hours. In the meantime, you should go off in search of other concentrations of fish. Perhaps it will be in an entirely different portion of the lake, or it could be just around the next point or shoal. Often the next group of walleye you will encounter will be in a similar area to the group you temporarily left.

For instance, if the fish you were working first were on a slight channel break in a creek arm. You might find another group further along that same break or on the break of another creek channel. If these fish are feeding then that hour you spent on the first group taught you something. It tipped you off to the next groups location. So in no way was that hour wasted. If the second group isn't feeding, find a third group and so on. Fish until the bite slows and then, you guessed it, back to the first group.

More often than not a fresh approach to the now rested first group will result in at least a few, if not many bites.

Does it always work this way? Well nothing in fishing and only a few things in life are set in stone. Walleye do not always behave the same way, day in and day out, as they relate to their food source, and environmental conditions.

In a recent Professional Walleye Trail tournament, many other pros and I were faced with similar circumstances that forced us to change locations after a week of fishing the same location. When you have fish biting well in the same area for that long it's easy to become complacent and off your guard. After all if it isn't broke don't fix it.

Of course Mother Nature threw her usual curve ball at the most inopportune time. There I was sitting in second place, a mere ounce out of first, with 2 small fish in the boat at 1PM on the final day of competition.

I looked toward the north were I knew another group of fish were located. Upon consideration I opted to stay put and work the group of walleye I was on. Wrong move? Perhaps. The fish to the north bit better and the pro's fishing them placed high in the winner's circle. The fish I was on, started biting furiously a mere 15 minutes after I had to go in for the weigh-in.

All I could do was watch as I plummeted down the rankings to 38th place. I could have taken the TIME to run north to the other group of fish. But instead I stayed put and ran out of time just as the bite started.

Another line from the movie states, "Time is the fire in which we burn". Fire indeed, my closing comment on stage was that I needed a fire extinguisher to put out the flames. The ability to avoid scenarios like these only comes with experience. That's why experience pays.

Knowing when to stay, allowed the author the opportunity to land this monster 14.64 lbs. walleye. (Photo By Jeff Simpson/In-Fisherman) 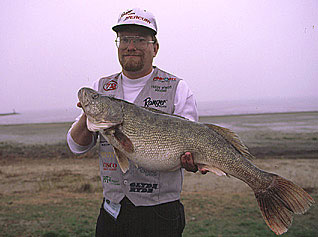